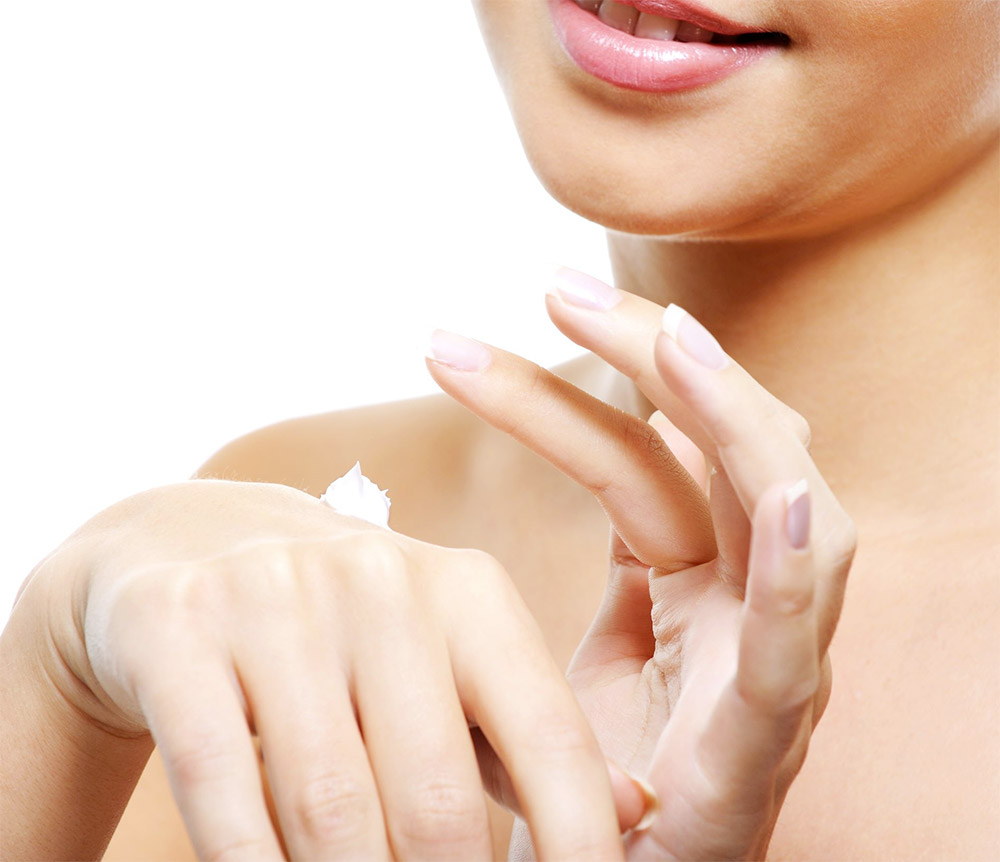 A portmanteau of “cosmetic” and “pharmaceutical”, this term is used for cosmetic products that can penetrate the epidermis and thus work at a deeper level.

They are the evolution of the concept of cosmetics, closer to pharmaceuticals in terms of their scientific reliability and mechanism of action.

A portmanteau of “cosmetic” and “pharmaceutical”, this term is used for cosmetic products that can penetrate the epidermis and thus work at a deeper level. They are the evolution of the concept of cosmetics, closer to pharmaceuticals in terms of their scientific reliability and mechanism of action.
The name was coined by Albert Klingman, an American dermatologist who laid the ground for how these products should be classified. Namely, they should be capable of penetrating deep into the skin once applied, they should have a known biochemical mechanism of action, and their efficacy should be substantiated by clinical trials.
This was the premise for the DERMOKLOTHO® line of products developed by NutriResearch, a company whose guiding principle is science, and more specifically, molecular biology. With a background in the pathophysiology of wound healing and tissue repair alterations, over the years, the company has developed amino acids formulations that optimize the structure of the dermis, not only when taken internally, but also through topical application. These nourish the cells that control the synthesis of collagen and other structural molecules of the dermis, the layer of skin below the epidermis that plays a key role in the integrity of the skin. Delivered from out-in, this nourishment causes a considerable increase in the levels of collagen, elastin and fibronectin, all key components of skin that are responsible for its firmness, elasticity and cell adhesion.

The aging process involves numerous changes affecting the tissues and cells of the entire body. As the body gets older, senescent cells accumulate in many tissues, compromising their proper function.
These cells have a strong impact on those surrounding them: they change the micro-environment by secreting substances that act as mediators of inflammation, and they interfere with the repair mechanisms of cell DNA. The aging of skin is strongly related to the continuous stress caused by agents such as infrared and ultraviolet rays, temperature changes and repeated trauma (including changes in facial expression), which lead to repair reactions that are similar to those induced in wound healing.
NutriResearch has dedicated its research to these issues, coming up with innovative solutions. The reference text for good dermatologists is the Textbook of Aging Skin, which contains two chapters on the following scientific subjects: “Aging Skin: Nourishing from Out-In – Lessons from Wound Healing” and “Aging Skin: Nourishing from the Inside Out”. If you choose our products, you’re choosing documented research. DERMOKLOTHO® has made documented research a fundamental aspect of its identity, because choosing research means taking real care of your skin.

THE SPECIAL BLEND OF AMINO ACIDS IN DERMOKLOTHO®

Over the years, the company’s background in the pathophysiology of wound healing and tissue repair alterations has led to the development of special amino acid formulations that optimize the structure of the dermis, whether they are taken as nutrition, or made available to the cells that control the synthesis of collagen and other structural molecules of the skin. It has been demonstrated that these special blends fully safeguard the regenerative capacity of the collagen and elastin structure that is typically found in young people, thus increasing the efficiency and extending the lifespan of fibroblasts.
The DERMOKLOTHO® special blend of amino acids (SBAA) enables fibroblasts to eliminate older, more fragile collagen and replace it with newer more elastic collagen, without increasing the number of cell generations. Its properties have been tested in molecular biology studies conducted at university research centres. These studies have shown that, by feeding off human fibroblasts, the SBAA not only increases the physiological synthesizing capacity of collagen and elastin, but also boosts the antioxidant action of fibroblasts in the areas where it is needed, rather than where it is not needed or where it inhibits cell and collagen rejuvenation.
Regular use of the SBAA has an anti-aging effect that improves the efficiency and lifespan of fibroblasts. It is also particularly useful in conditions of environmental stress for the skin (excessive heat or cold, prolonged exposure to infrared or ultraviolet rays, pollution, etc.). Self-care is important: the sooner you start, the more you get from it. One of the features of this treatment is that the more severe the problem, the better the results will be over time. But it’s one thing to get a fast, temporary, purely cosmetic, result, and another to have a treatment that nourishes the skin and supports the physiological activity of the cells responsible for its integrity. The longer the treatment, the better the results that can be seen. 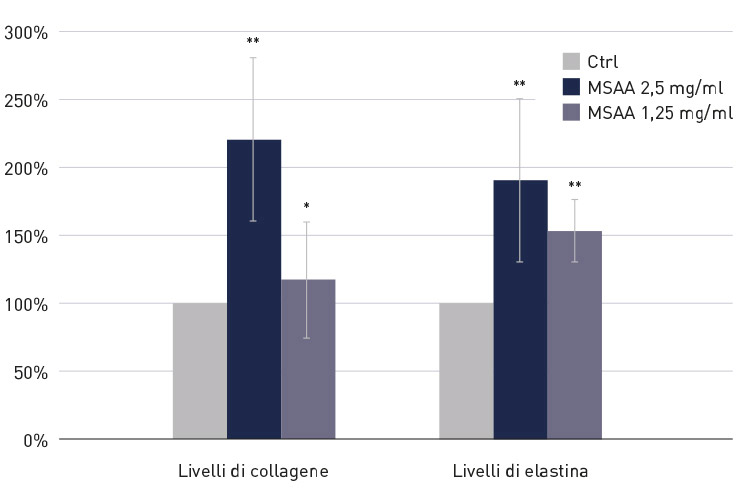 Collagen and elastin levels in a human fibroblast culture after treatment with two different concentrations of SBAA compared with a control (untreated cells).
* p ≤0.05 and ** p ≤0.01: statistically significant vs controlo

The extracellular matrix (ECM) consists of proteins providing the necessary support to cells and tissues that can be classified as structural or non-structural, depending on their function. Collagen and elastin are examples of structural proteins. As skin ages, the extracellular matrix deteriorates. A reduction in collagen and elastin production is caused by greater tissue stiffness, and loss in thickness and structural integrity. This loss is accompanied by a reduction in the cells’ capacity to respond to environmental changes. In aesthetic terms, this aging process is seen with the appearance and gradual increase in wrinkles.

The purpose of the study presented here was to test the capacity of the two different concentrations of the DERMOKLOTHO® special blend of amino acids (SBAA) to influence collagen and elastin synthesis by a human fibroblast culture and to compare it to the activity of fibroblasts that do not come into contact with the blend (control).
The SBAA treatment led to greater collagen and elastin synthesis compared to the untreated cells.

The aging process involves numerous changes affecting the tissues and cells of the entire body. As the body gets older, senescent cells accumulate in many tissues, compromising their proper function and strongly affecting the surrounding cells, and interfering with the DNA repair mechanism. In this context, sirtuins play a fundamental role in the DNA repair process. This is why they are said to be responsible for longevity.
In mammals, there are seven sirtuins, ranging from SIRT-1 to SIRT-7, each with its own localization, function and enzyme activity. The most important of these is SIRT-1, which is involved in genome stability mechanisms. It has been found that the levels of this protein decrease in various diseases and in accelerated aging models, and that maintaining the expression and/or activity of SIRT-1 during senescence prevents age-related symptoms.
The purpose of this study was to assess, using a specific test, the capacity to moderate Sirtuin-1 levels in a human fibroblast culture, following treatment with two different concentrations of SBAA.
The most significant result was obtained with a low concentration of the product (1.25 mg/ml), which determined a statistically significant increase (49%) in Sirtuin-1 levels compared to the control. 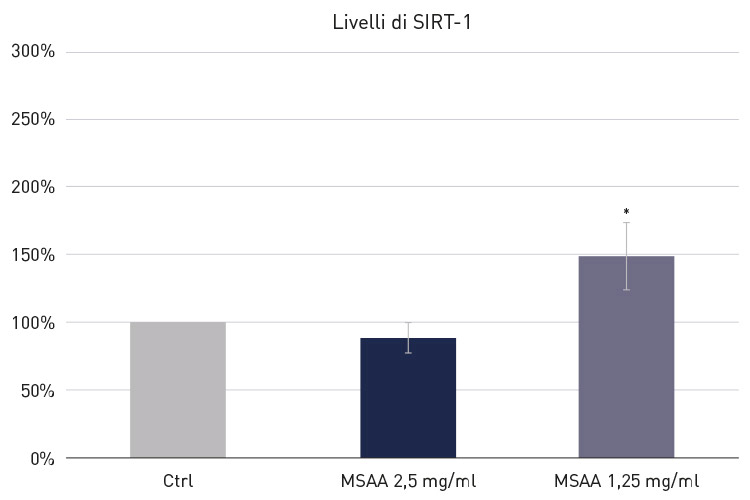 Sirtuin-1 levels in a human fibroblast culture after treatment with two different concentrations of SBAA compared with a control (untreated cells).
* p ≤0.05: statistically significant vs control

Wound healing is a complex and highly regulated process that involves cellular, molecular, biochemical and physiological events that enable living organisms to repair various types of lesion. This process includes three interconnected stages: inflammation, tissue formation and proliferation, and tissue remodelling. All three stages begin the moment the physical lesion occurs and continue throughout the healing process.
The combined action of intrinsic and extrinsic aging puts human skin through a multitude of changes that have a potential impact on the wound healing process. In fact it has been scientifically demonstrated that each of the healing stages is closely linked to age. More specifically, keratinocytes, fibroblasts and vascular endothelial cells, the protagonists of the healing process, show a reduced proliferative response in older animals.
In this study, a fibroblast cell line was used to examine the effect of two different concentrations of the special blend of amino acids SBAA on the wound healing process, with a particular focus on the cell proliferation stage.
At both concentrations, the product did not show more proliferative activity than in the control (untreated cells); on the contrary, cell proliferation appeared to be reduced. In particular, it led to a ~50% reduction in cell proliferation at both concentrations, compared to the control (BrdU assay), whereas no difference in behaviour was seen in the wound healing assay.

In conclusion, the DERMOKLOTHO® special blend of amino acids enabled fibroblasts to eliminate older, more fragile collagen and replace it with newer, more elastic collagen, without increasing the number of cell generations, which is related to aging. 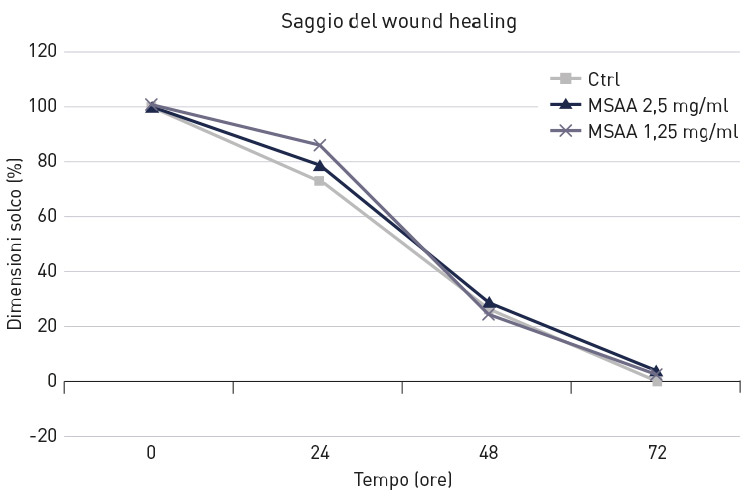 Percentage changes in cell motility/greater cell proliferation after 24-hour treatment with the product at the two test concentrations.